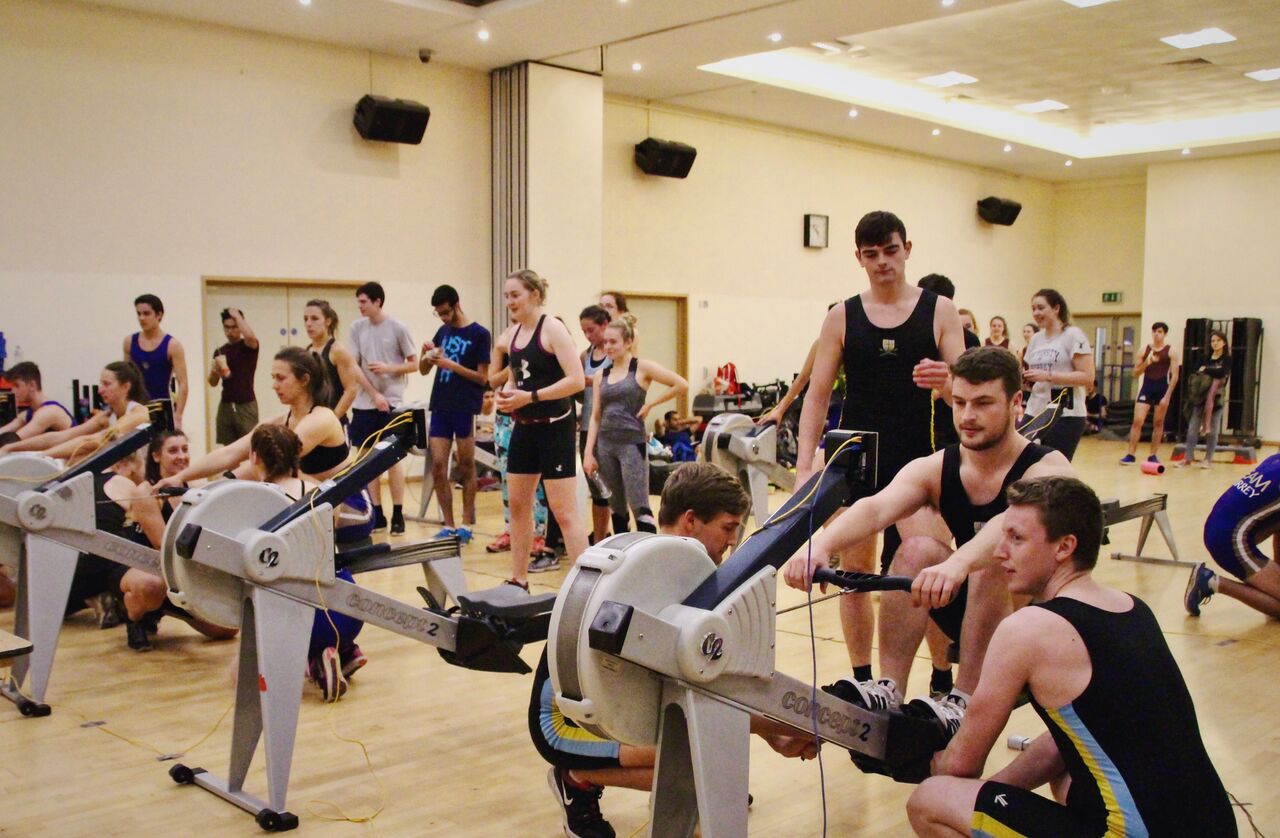 First off, were the heavyweight men racing over 2000 meters. The category was dominated by USBC with three athletes on the podium. Mantas Volkauskas took the win, followed by Ben Radcliffe-Brown and Yaroslav Chichvarkin.

Splitting up into three heats, the heavyweight women were next. This event saw 7 USBC girls come in the top 9 with women’s development squad captain Megan Pearson placing second with a personal best time of 7:13 behind Molesey athlete Elo Luik. Third place was taken by new USBC member Maddie Gardner.

Ellie, warming up before BUCS Indoors

The lightweight men in action

The senior men’s lightweight event was won by three USBC athletes who joined the squad in September, Ludovico Iannizzotto Venezze, Charlie Collins and Giovanni Morescalchi. USBC’s Jasmine Bone then dominated the women’s lightweight event and she was delighted to win the event after winning at Kingston Small Boats Head the day before.

Jas with her well-earned medal

This event was the first competition for the development squad which saw them race over 1000 meters. The beginner men faced tough competition in their heats. With KCL and Roehampton taking the podium, Wilson Sandengu placed fourth after a strong race. He said: “I have been at the university for 3 years and this was my first time competing for Surrey so I was nervous and had a poor start. Once I was going it was great, I found a rhythm and I had Sam shouting support in my ear so that was a good motivation.”

Abbie Cook took the win in the development girls event. She said: “It was fun actually, I really enjoyed it even though I was very nervous before. It was such a good atmosphere. It was competitive yet everyone was so supportive and cheering on each other.” Lucy Thompson placed second behind her.

The last race of the day was the relay with the women’s and men’s teams starting together. In the men’s category, USBC placed on second and third place behind RUMSBC who had mastered their changeovers which helped them take the lead. USBC beginner Wilson got the opportunity to race again as part of one the senior men’s teams in the relays: “I find sprints a lot easier than long distance and being with the senior squad made it even better. That was a great end to the day.” The USBC girls battled it out between themselves and the team of Megan Moloney, Megan Pearson, Maddie Gardner and Ellie Stevens fought hard to take the win and the champagne prize!

Big thanks to Dan Hetherington from British Rowing and Stag TV for their help in the organisation and the livestreaming of the event. If you missed the event or want to watch your race back, the livestream can be found on our YouTube channel, University of Surrey Boat Club.