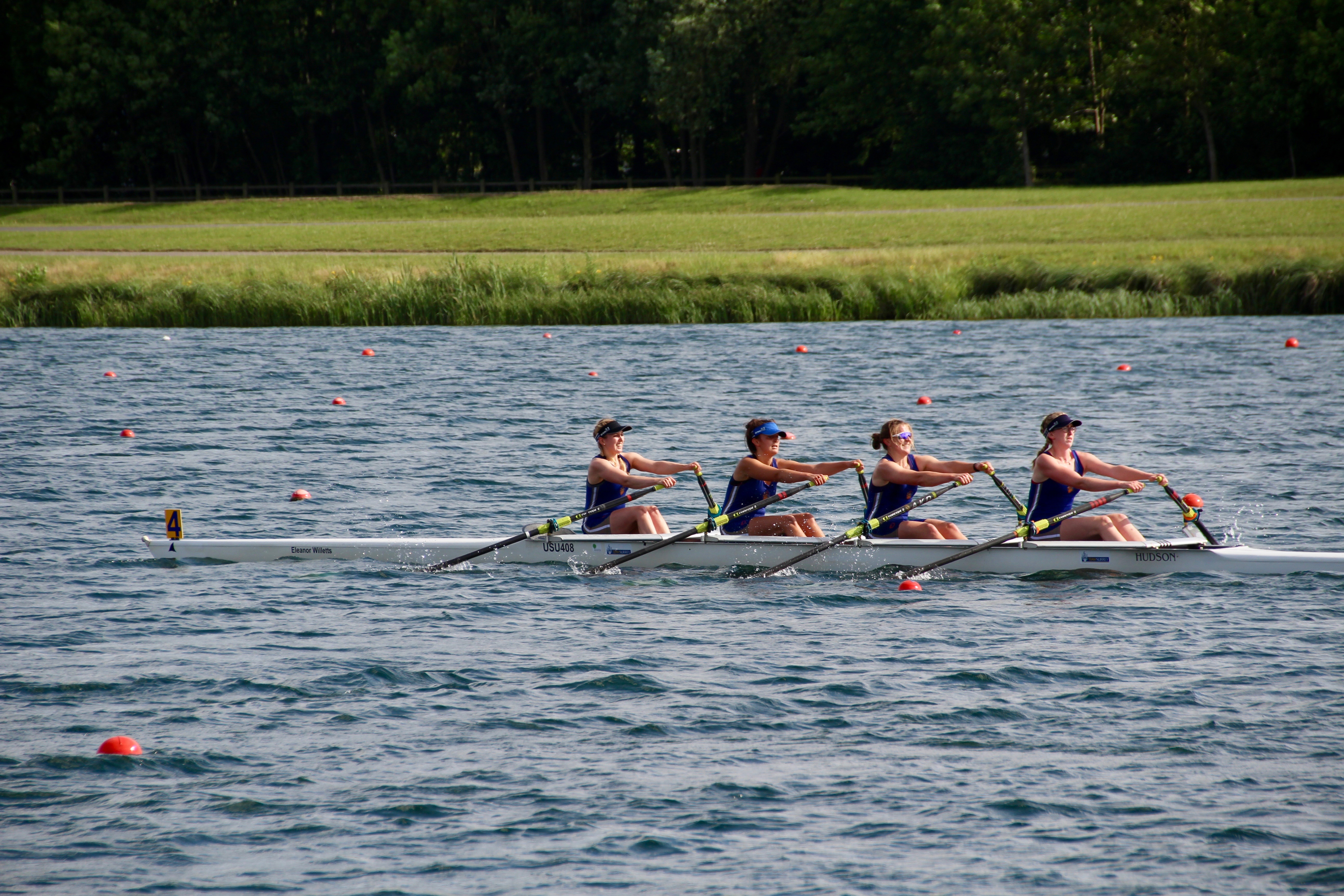 The weekend of 3rd/4th of June saw Surrey head to Dorney Lake for one of the biggest events in the British rowing calendar, Metropolitan Regatta.

On Saturday, the women’s eight, coxed by Joanna Walker, was first to race in a straight final. Jasmine Bone, Ellie Stevens, Jenna Charman, Fiona Norris, Rachel Pritchard, Sophie Hossack, Naomi Coleman and Megan Moloney raced hard and narrowly missed out on 2nd place to University of York with just a 6th of a second between the two crews. On Sunday, the girls started the day with a time trial which they rowed well and caught the crew in front of them. They then had a hard battle in their final, coming through 1km they were in 2nd place and in full contention to win but unfortunately a big push from the crews surrounding them saw the girls cross the line in 4th. With this being their first race together the crew did extremely well and are excited to push on to Henley Women’s.

President and 7 seat Ellie said: “Having only been together in this crew for one week previous to Met, we knew that we were going to be in for a challenge when competing against crews who have been together all year. However, we trust the process and had confidence in the amount of training we’ve done this year. In the final we crossed the 500m bowball-to-bowball with 3 other crews. I am confident that with the next few weeks of training under our belts we can be sure to cross the line first in races to come”.

The women’s four of Hattie Case, Megan Pearson, Anika Piezka, Holly Stemp and cox Tsolo Swan, raced on Saturday. They first had to conquer their heat, needing to come top three to secure a place in the final. This was an easy task for the crew who crossed the line in 1st place. In their final, the girls raced hard and proceeded to place fourth. Bow seat Holly said: “We were really pleased with how the day went, racing at Met was a great opportunity to gain some valuable racing experience as a crew. We’re now really excited to build on this result going forward to Henley Women’s.”

Also on Saturday, the women’s quad of Charlotte Gill, Lizzi Hatch, Cécile Flavin and Rachel Ebbens fought hard in T3 but just fell short, coming 3rd behind Bath and Staines. However, they came back on Sunday with a point to prove and did exactly that. Racing one tier up, the girls raced hard and sculled well, dominating the second 1km of the race to cross the line 8 seconds before the next crew. The crew were greeted on the landing stage by a very happy coach and went to collect their medals together. Stroke seat Charlotte said: “We stayed in our own tunnel for the first 1000m. I had no idea where we were in the field but I was determined to row our own race and row it well. As I started to see the other crew’s sterns come into vision I knew we were ahead and that really motivated me to push on. Before I knew it, we were in the last 500m and I could see all the crews in front of me so I knew we were in the lead. When I heard the buzzer as we crossed the line first I couldn’t contain my happiness. This is the reason we train so hard, for feelings like this”.

The men’s coxed four consisting of Andrew Stevenson, Jonas Butvilas, Alex Law and Harry Grassom (coxed by Joanna Walker) raced in their heat on Saturday coming 2nd, beating training partners Molesey BC by just 1 second. Heading into the final the crew were feeling excited and ready to make their mark on the field. After a tough battle the boys crossed the line in 3rd place, ahead of Molesey and Kingston. On Sunday, they again placed 2nd in their heat just 2 seconds behind Durham University A, putting them in a strong position for the final. In their last race of the weekend, they boys fought hard and came 3rd behind two Durham crews. Men’s captain and 2 seat in the boat, Alex, said: “It was a very promising weekend, racing for the first time in this crew. We now have a positive momentum going forward to Marlow and Henley in the coming weeks.”

HPASS athletes Ali Douglass and George Stewart raced the championship coxless pair for Molesey BC on both days. On Saturday, the boys dominated their heat and final, crossing the line 17 seconds ahead of the rest of the field. On Sunday they were faced with competition from Cambridge University who crossed the line just a 3rd of a second in front of Ali and George. Nonetheless, they are still in a very strong position for the rest of the season.

Harry Glenister, also a HPASS athlete, raced on Sunday representing Leander in a quad. The crew proved their speed and skill by finishing in first place, in front of two very strong crews from Molesey and Edinburgh University.

USBC are definitely ready for Henley Women’s and Henley Royal!