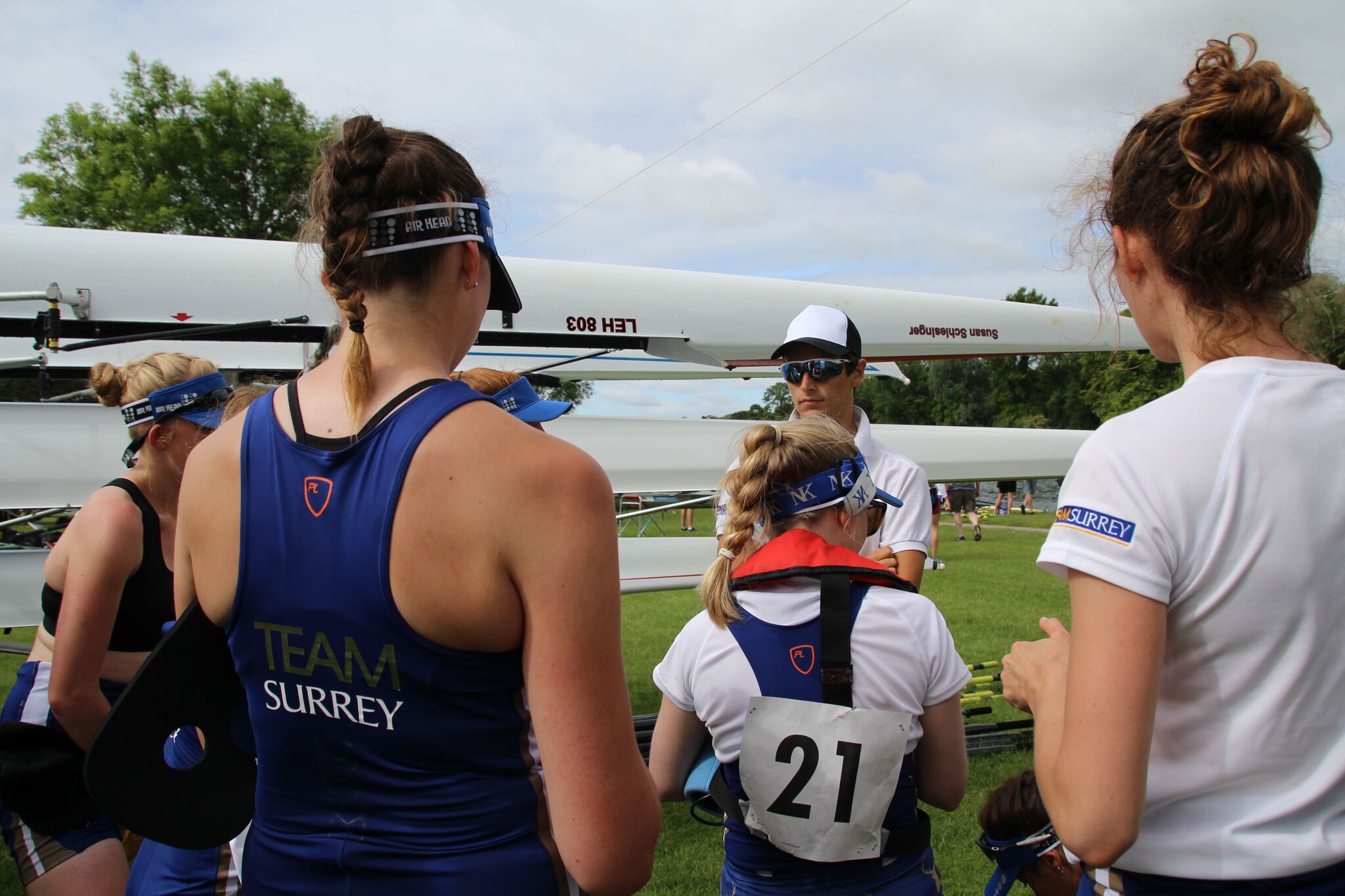 The 30th Henley Women’s Regatta saw USBC take its biggest squad yet to the prestigious Henley course in an attempt to qualify three boats.

Each crew was required to time trial on Friday morning and first up was the Academic 8+ consisting of (from bow): Megan Moloney, Naomi Coleman, Sophie Hossack, Rachel Pritchard, Fiona Norris, Jenna Charman, Ellie Stevens, Jasmine Bone and cox Joanna Walker. Chasing down Nottingham University, the girls set off and proceeded to pull away from Imperial College London. Out of 28 crews the girls were placed 17th which made them the fastest non-qualifier of the event. Coach Sam Tuck said to the crew, “Rowing is not just about one season, it is about constantly building and gaining more experience.” Of the 9 girls that made up this crew, 2 learnt to row at Surrey this year and in total 6 of the crew members learnt to row/cox at Surrey.

The 8+ rowing back after their timetrial

Next up was Senior Quad of Rachel Ebbens, Cecile Flavin, Lizzi Hatch and Charlotte Gill who were up against 19 crews and were aiming to build on their win at Met Regatta. After a strong and clean start, the quad settled into their race rhythm, using the support from the bank to push them through the middle 500m. This paid off as the girls came off the water to find out that they had qualified.

Then it was the turn of the Academic 4+, made up of Holly Stemp, Anika Piezka, Megan Pearson, Hattie Case and coxed by Tsolo Swan. In a large category of 26 crews the girls face a hard battle but they were up for the challenge. A solid race saw them join the senior quad in qualifying, something which the girls celebrated with delight and pride. All of them commenting on how overwhelmed and proud they felt.

Big smiles from the crew after their time trial

With time trials over, it was time for the first heats, a chance to really see what each crew is made of in brutal side-by-side racing. The quad were first up against Henley Rowing Club, a crew familiar with the river and with a bank full of home support. But the girls felt confident and proved this in their race. While being slightly down off the start the USBC quad found their solid rhythm again and began to move through the opposition. By halfway they were a length up and using the calls of support from the bank, they managed to break clear and continue pulling away from Henley.The overall verdict was 4 lengths and the girls were through to the quarter-final on Saturday. After the race finished, umpire of their race and Olympian Matthew Pinsent complimented the crew on their sculling!

On their way to the start line

Out of the blocks

Rachel Ebbens checking the boat is lined up

Shortly after, the four were sat on the start line ready to race the University of London. They gave everything they had up against the strong crew but unfortunately the girls were unable to cross the line first (UL went on to win the event). Megan Pearson, who began rowing in September as part of the development squad said “we really stepped up to the challenge and achieved our goal. I feel privileged to be able to train alongside such a strong and supportive group of girls”. Along with Megan, Anika and Hattie also learnt to row this year while Holly began rowing at Surrey last year making this a very home-grown crew, there is a lot more to come from these girls!

On their way to their heat against UL

The four vs UL

After a long rest, the quad returned to Henley on Saturday ready to face Tideway Scullers School in the quarter final. They knew it would be hard but they were prepared for the challenge. The crew had a strong and clean start but unfortunately the TSS crew moved away from them. However, the girls didn’t give up, battling right to the finish line and not letting the crew pull away which led to a verdict of 3 lengths.The Tideway crew went on to dominate the event and win the final. Cecile, who only took her first stroke in September (as part of the development squad), was delighted with the result “8 months ago I never thought I would be qualifying at Henley, let alone win a race there, It’s been an amazing experience in my first year of rowing with some brilliant people! “.

Overall it was a hugely successful weekend and a sign of things to come from USBC. Commentators, crews and coaches commented on the rise of the boat club and the successes we have been having over the past few months. This is all down to Head Coach Sam Tuck, fellow athlete and coach Ali Douglass and S&C coach Rich Lalor. Without them pushing us and demanding more from us each week, we would not have been able to break USBC history and send 3 boats to Henley Women’s or have 2 of those qualify. We are extremely grateful to them all for the time and effort they put into the club.

Sam was first to praise the effort of all crews this weekend, “Sport is about raising your game and these girls have done this all year! The girls are excited to carry this momentum and can’t wait to see what they can do!

It is now the turn of the men’s four who are aiming to qualify for the Prince Albert Challenge Cup on Friday at HRR Qualifiers, after a strong performance at Marlow Regatta the boys are feeling positive.

If you would like to row at Surrey, please email ussu.boat@surrey.ac.uk for more information on the squads, training and any questions.