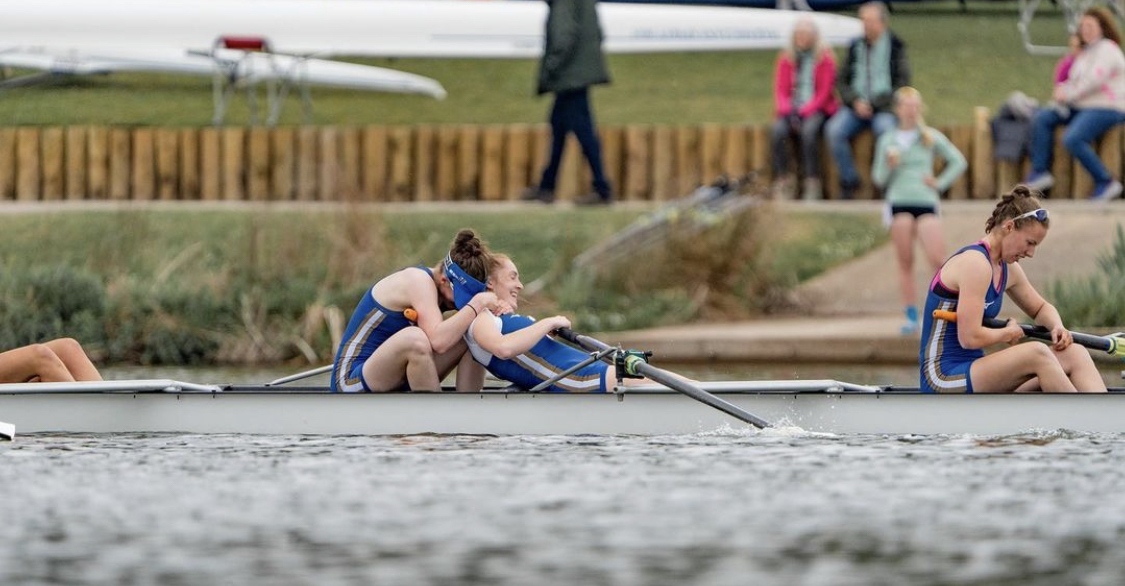 BUCS Regatta is the pinnacle of the university rowing season for the University of Surrey Boat Club and is a chance to compete against the best crews in the country. On the 30th of April, we headed to the national water sports center in Nottingham to kick off the regatta season. The hard work over the past year was showcased across the 3 days in countless time trials and 2km races.

Saturday saw athletes from all our squads compete and pull out some incredible results.

The woman’s beginner 8 dominated their competition, winning both their time trial and semi-final to secure a place in the A final. The A final allowed the squad to demonstrate just what Surrey’s beginner squad can do, winning the final by an incredible 31-second gap; USBC’s first gold medal of the weekend.

Women’s Development Captain, Zoe Stearns describes crossing the finish line; “It was exhilarating to pass that finish line both as an athlete and as a teammate. You get such a rush of pride – nearly overwhelming one, because you pass that finish line representing the university, the programme, your crew and your own efforts. It’s a rush and a moment that makes all the blisters, early mornings and injuries so worth it.”

The men’s beginner quad also showed the strength of Surrey’s development program in their time trial and semi-final placing second and procuring a spot in the A final. The crew fought hard to come away with 3rd place, a bronze medal to add to our running tally.

Day 1 also saw the men’s intermediate single scull events where 5 members of the senior men’s squad raced: Clement (in the lightweight category), Joe, Jack, Tom, and Manny. Tom went on to win the C final whilst Joe and Manny fought it out in the D final. The senior women’s squad had an intermediate quad race, where they place in the B final. A beginner women’s quad stepped up to the higher category to also race in the intermediate event, making it to the F final. USBC also had two crews race the women’s championship lightweight double. Sacha and Leonie Kennedy fought hard making it to the A final, placing 6th overall after chasing Olympian, Imogen Grant, and other world-class athletes down the lake. What an incredible achievement to make a final amongst some of the world’s top rowers. The second lightweight double made up of Fran and Amy also raced, making it to the C final.

Overall an amazing day of racing and setting the tone for the rest of the weekend.

Sunday was another fantastic day with 15 crews racing, winning another 5 medals.

The women’s development squad once again proved just how strong they are. With 2 crews entering into the beginner coxed 4 events, USBC made BUCS history securing both 1st and 2nd place. That makes the medal tally stand at 5 medals: 4 of which coming from our beginner’s squad alone.

Leonie Kennedy had a busy day competing, winning silver in the women’s lightweight single event before jumping straight into her crew boat with Freya, Lois, and Sacha to win another silver medal in the championship lightweight coxless four events. Racing two events in one day is a very challenging task to do, but to go on to win medals in both is even greater.

Our men’s intermediate coxed four also sought out success. Made up of Sydney, Ed, James, and Jamie, coxed by Ellie, they did remarkably in their time trial and semi-final for a spot in the A final which saw the crew fight for second securing that silver medal by 0.2 seconds in front of 3rd.

Following the senior men’s squad saw many single scullers race, and the same followed for the women’s squad. Amy Lavelle, one of the 4 women to race in a single on Sunday did a fantastic job of coming second with her B Final. Zac, who is part of the beginner men’s squad, also took on the single event, coming second in the B final.

A thrilling race to remember was the D final of the men’s intermediate double sculls where 3 of the 6 lanes held USBC crews. Joe and Jack, Clement and Orlando, and Manny and Tom put on a show where they all were in to play for the whole race. Manny and Tom were victorious in what we called “the ultimate showdown”.

The final day of BUCS Regatta 2022 saw us race in four A finals in just one hour, an exciting and emotional experience for USBC athletes, coaches, and supporters.

Day 3 also saw 2 other women’s intermediate coxed four crews battle against one another in the F final closely followed by USBC’s second men’s intermediate quad who won their D final by an impressive 5 seconds.

The weekend was one to remember returning with a total of 8 medals 2 gold, 5 silvers, and 1 bronze. A summary of these medals:

These medals helped place the University of Surrey Boat club 11th overall with the women’s squad placing 7th and the men’s 13th.

Overall, BUCS Regatta 2022 was an unforgettable weekend with huge success from Surrey athletes, a testament to the tireless efforts and hard work from all USBC athletes and coaches Sam and Ellie. USBC look to continue the weekends success into regatta season and as the club continues to grow.