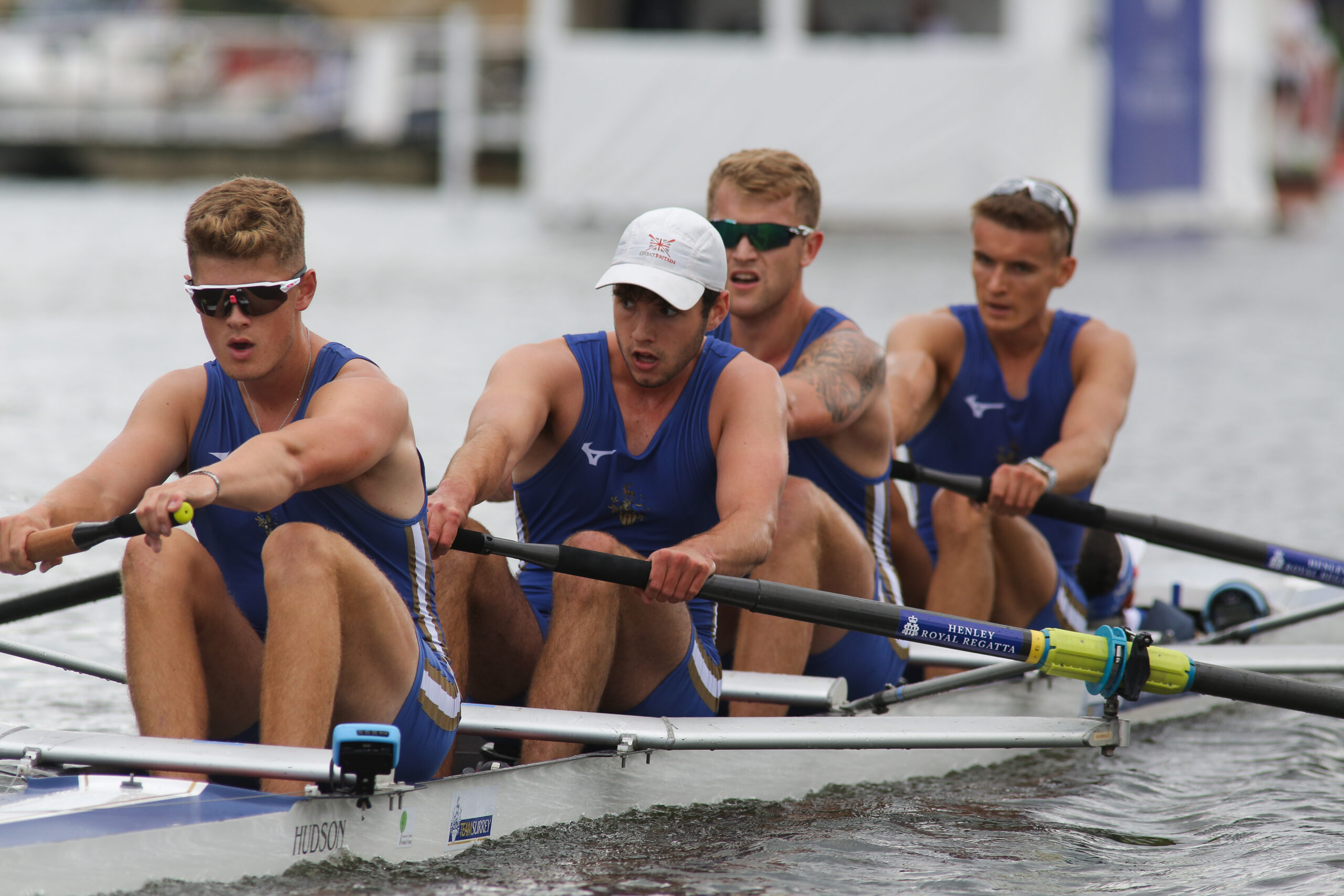 HRR 2021 saw USBC take on The Prince Albert Challenge Cup for the first time since 2017, which has been an exciting target for the Senior Men’s squad this year. Having seen the outstanding pace of the coxed fours at Marlow, Metropolitan and BUCS Regattas in previous weeks, the squad was confident we could provide a highly competitive crew for our first race down the Henley Stretch since 2019. The boys went into the final regatta of the season confident and were set to face Durham University ‘B’ on Wednesday afternoon.

Well prepared and ready for the fight, the crew of:

went off the blocks confidently and were able to take a boat length lead within the first 200m of the race. With a 3 and a half length lead passing Upper Thames, and the crew’s confidence built by a season of success, the four started to relax and lower the stroke rate. Natasha Dunt, in her first season as a cox, kept her cool with the poise of a much more experienced athlete and brought the boys down further to an even more conservative rate. The four paddled past the Stewards’ enclosure with a 5-length lead over Durham and were through to their second round against Bristol University.

Round two of the Prince Albert took place on Friday, where the enclosures were starting to fill up and the buzzing Henley atmosphere that we haven’t seen since 2019 emerged once again. The crew knew this was never going to be an easy race, Bristol had also won a convincing first round against Exeter University by a similar margin. A spot in the semi-final of Henley was all to play for.

Off the start Bristol tried hard to break through but both crews remained fairly level leaving the island. After putting in a huge start, the crew from Bristol took a length going through the ¼ mile which the boys from Surrey managed to maintain all the way to the ¾ mile. After some moves from both crews, Bristol started edging away. A valiant effort from the Surrey crew managed to minimise any increase in margin, but Bristol proved too strong with a final verdict of 1 and ¾ lengths.

A few words from the bow seat, President Jamie Gamble:

“What a campaign that was. I could not be prouder of the rest of the crew, Coach Sam and USBC. We created some club history by being the first Surrey crew in recent years to make it to the Friday of Henley. We have been fortunate enough to do so well in the coxed four this season by being completely fearless of anyone we race and having full trust and faith in each other. Henley summed that up perfectly, as complete underdogs we dominated our first round and pushed a very strong Bristol crew all the way to the line, just missing out on a spot in the semi-final of Henley. Excitingly, this is just the beginning for USBC.”

The boys left everything out on the course on Friday showing the rest of the rowing community how much USBC has stepped on in recent years. We’re so proud of our athletes who took part in the Regatta and have to say a special thank you to our Head Coach Sam Tuck, who has continued to push the club forward since our last appearance at Henley Royal Regatta in 2019. Similarly, we have to thank all the alumni and current members of the University of Surrey Boat Club who came out in force to support the club all week. Finally, we would like to acknowledge our Temple Challenge Cup crew who unfortunately had to withdraw from the regatta after having prequalified, due to Covid-19 isolations.

Henley Royal Regatta draws the incredibly challenging, yet successful, 2020/21 season to a close. We are already in preparation for the 2021/22 season, which looks to potentially be our most successful and exciting yet. If you are interested in joining us, do not hesitate to get in touch: ussu.boat@surrey.ac.uk.