On 29 April 2016, the University of Surrey Boat Club (USBC) made their way to Holme Pierrepont in Nottingham to compete in three days of lane racing at BUCS Regatta. The weather for BUCS Regatta is notoriously known for being grey, wet and windy, and the weekend was no exception! Races were cancelled, boats were flipped by the wind – both regular occurrences over the three days!

The next event of the day was open-weight single sculls. Angus Warren completed the time trial in a respectable time, but was unfortunately eliminated and unable to compete in a final. The same outcome came to our Beginner men’s 4+’s and despite entering two crews, we were unable to be placed in a final.

However, Sophie Hossack’s beginner single sculls pulled us up as she qualified for a D-final despite being in a single scull for four sessions. Unfortunately, the final was cancelled due to the deteriorating weather conditions.

Sunday, Day 2
Sunday was the one of the biggest days for USBC; we had women’s intermediate 8+, women’s beginner 4+, men’s beginner 8+’s and men’s champ 4+’s.

The women’s intermediate 8+ held out a good fight and qualified for the C-Final, but were unable to compete due to injury. The women’s beginner 4+ pulled Surrey back into lane racing in a C-final, finishing sixth.

The beginner men continued to bring Surrey in the lane racing by qualifying for the E-final, but this was again cancelled due to the weather conditions.

Finally, the biggest event of the day was the Men’s Champ 4+ where our men would be racing against University crew greats, such as Newcastle and Oxford Brookes. Despite the challenging winds, our Champ 4+ held out during the time trial and qualified sixth, which consequently positioned them in a semi-final to determine whether they would compete in an A-final.

The boys stormed down the course, chasing Newcastle and Edinburgh, holding out a fight with St Andrews as it became a bow-ball to bow-ball battle for third place, determining whether or not they would qualify for the A-final. Our boys managed to grasp third place with just a second difference between them and St Andrews!

After waiting what felt like a lifetime, their A-final came round at the end of the day. Although our boys didn’t finish within the top four, they went out with the intention to enjoy the race and embrace the fact that they managed to go where no Surrey men’s champ 4+ have gone in the last two years.

Kieran Dibley, Strokeman Champ 4+ said: “It was amazing to be sitting on the start line with the best athletes in the country, with the best men’s crew from Surrey!” 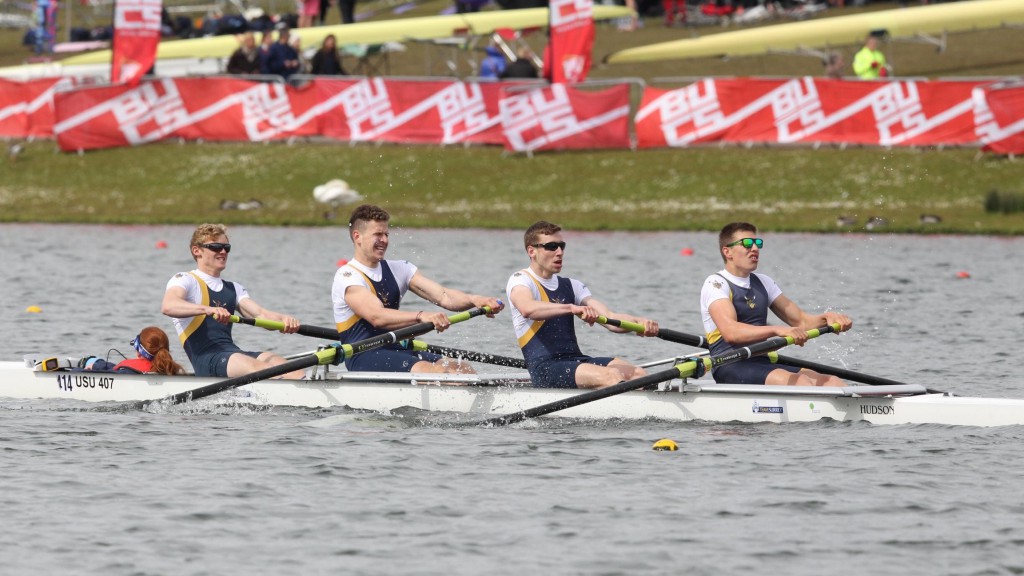 Day 3
The final day saw the least amount of racing for Surrey; we had men’s beginner single scull, and women’s Champ 4+.

Our beginner single sculler, Aleks Arnaudov battled through the winds that swept across the lake, but was unable to qualify for lane racing. As the winds continued to increase, our Women’s Champ 4+ pushed through the head wind and came in sixth, two seconds behind Durham.

As the winds picked up even more and the weather continued to deteriorate, the women’s 4+ waited with anticipation as to whether the opportunity for them to race in the A-final would occur. Finally, in late afternoon, just as the heaven’s opened, the 4+ took to the water with the intention of taking at least fifth place from Durham. Unfortunately, due to injury, we were unable to give Durham and the other crews the dog-fight we intended. However, we took the opportunity and enjoyed every push of the 2km course, feeling prouder than ever.

Overall, the weekend included many highs and lows for USBC, however we fought and rowed to the best of our ability and came away proud.

By entering two champ crews, racing against not only the top university crews, but also rowing stars of the future; we can take this as a taste of what is in store for the University of Surrey Boat Club, putting our University name alongside those of Newcastle, Durham and Oxford Brookes.