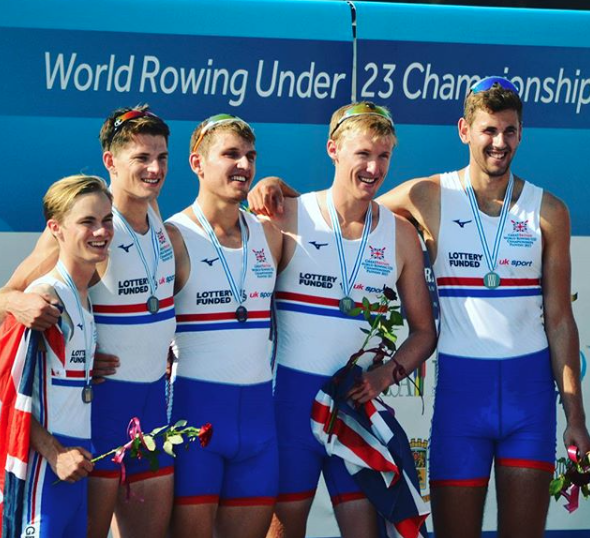 The 2017 World Rowing U23 Championships which took place on 19 – 23 July in Plovdiv featured three Surrey athletes who were selected to be part of the 56-strong Great Britain squad: Harry Glenister in the men’s quad, Ali Douglass in the men’s eight and George Stewart in the men’s coxed four.

After a tough season of trials and racing, they were raring to race against some of the best from around the world.  With temperatures rising above 30°C, it was a challenging climate for the athletes but nevertheless created the conditions which saw many records broken.

All three of our guys put in impressive performances in their respective boats, each reaching their A finals. George and Ali left Plovdiv with a silver and bronze medal respectively.

George was first to get his hands on medal, winning silver in the final of the coxed four ahead of a crew from the United States that took bronze and just after the Italians who took gold. His boat had a challenging start on the first day of the regatta, coming 4th in their heat, but quickly got things back on track with a commanding win in their repechage.  This form continued to the final where they saw off all but one crew to take the silver medal.

Charles Clarke (c), George’s cox in the Great Britain boat, said: “It was a decent start, we entered the race in small steps. The last 300m we were just about hanging on, I looked at the bowman of USA at the end and I knew we had come second.”

George Stewart collecting his silver medal at the U23 World Championships

The men’s quad, featuring Harry ‘Big Glen’ Glenister, came 2nd in both their heat and semi-final, putting in promising displays as they looked to improve on their 5th place finish in Rotterdam the previous year.  They rightly went into the final with confidence, but unfortunately the crews from New Zealand, Russia and Italy pipped them to the podium in what was one of the most competitive races of the regatta, leaving Harry and his crew in a close 4th place.  This was an agonizing finish to what was an otherwise successful season in which they were the dominant British quad, winning at Henley Royal Regatta for the second year in a row.

Jack O’Leary, the stroke seat of the New Zealand quad that took the gold medal, said: “That race was the toughest I’ve ever done.”

The last race of the week saw ‘Active’ Ali Douglass take home bronze in the men’s eight just behind the Dutch and American crews, after coming 3rd in their heat and easing through their repechage.

Ian Middleton (c), Ali’s cox in the Great Britain boat, said: “It was a tough race as we knew everyone was quick in the heats, but we executed the plan. Everyone rowed really well together and we had some great pace in the middle. Before this, we raced each other at Henley and then had a three week project to get together.”

This was a particularly impressive achievement for Ali as he had previously competed as a lightweight at the World Championships in 2015 and 2016, winning bronze on both occasions.  Ali has now proven to be a top athlete as a heavyweight, and we are excited for him to begin his role as a sabbatical officer for the University of Surrey Student’s Union as the Vice President of Activity now that the season is coming to an end.

An all-round fantastic week for GB!