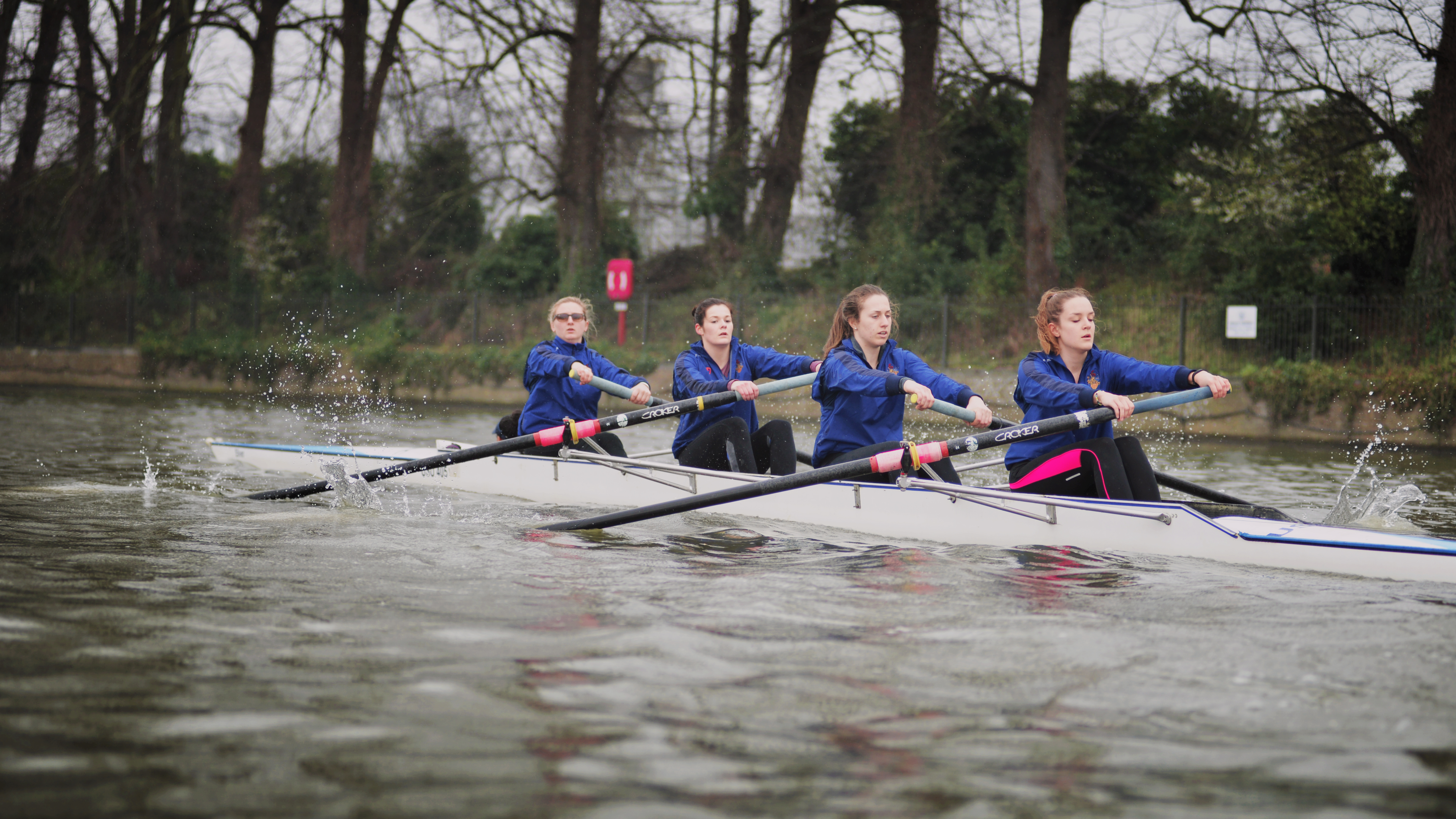 Division 1 started with tough conditions and an extremely strong headwind. Being one of the first races of the day, our women’s IM3.2x got hit the hardest by the conditions, finishing 4th and narrowly missing out on their final.

Next up, out women’s novice coxed four took the water and came 3rd in their first heat – saving some energy for the tough final they had lined up just over an hour later. The crew of Hattie Case, Megan Pearson, Alex Huber and Lizzie MacCann (coxed by Tsolo Swan) hit the rest of the field by storm and came away with a 1st place victory.

Following the success of the W.NOV.4+, our women’s novice quad (of Rachel Ebbens, Lizzi Hatch, Cecile Flavin and Holly Stemp) battled past the rest of the crews in their final to also take 1st place.

Our W.Nov.4x storming past another crew in their final.

The quad won by 20 seconds.

With an extremely successful 2 wins out of 3 races, the crews racing in Division 2 were determined to carry on USBC’s achievements.

Our women’s IM2.2x of Charlotte Gill and Lizzi Hatch faced some tough competition. With 3rd place in their heat, the double secured a place in the final. In an impressive line-up the girls were pleased to come away with 4th place overall.

One of the biggest races of the day was the men’s IM3 double. With 18 crews to beat, Harry Grassom and George Glenister managed to come away with 3rd place in their first race.

Having competed at Scullers’ Head in winter, Kieran Dibley raced his first regatta of the season in the single scull, having a brilliant race and coming 5th overall (having come 3rd in his heat).

Perhaps one of the most exciting races of the day was our novice men’s coxed four. It was the 4+’s first ever regatta, but the men remained composed throughout. At the 1500m mark, the men were 13 seconds behind the leading crew – Lancaster University. With a huge push in the last 500m, the 4+ took a phenomenal 18 seconds out of their opposition to cross the line in 1st place. The crew of Jean-Michel Williere, James Robinson, Dominic Taylor-Wilkin and George Walford (coxed by Joanna Walker) placed 3rd overall in their final.

The novice men’s four pushing through the last 250m.

The men staying composed in the last few strokes before the finish line.

With the day coming to an end and having already won one race, Holly Stemp partnered up with Jasmine Bone in an IM3 double to secure another fantastic win.

The double on their way to win the final.

The IM3 quad pushing past their competitors.

Leaving Holme Pierrepoint with 16 more trophies than before, USBC are excited for the rest of the regatta season.